Civil Rights and the Peanut Gallery

On April 1968, 2 weeks after the assassination of Martin Luther King, a woman named Harriet Glickman sent a letter to cartoonist, Charles Schultz, urging him to consider including a colored character in his famous comic strip, Peanuts.

Since the death of Martin Luther King, I’ve been asking myself what I can do to help change those conditions in our society which led to the assassination and which contribute to the vast sea of misunderstanding, fear, hate and violence.

As a suburban housewife; the mother of three children and a deeply concerned and active citizen, I am well aware of the very long and tortuous road ahead. I believe that it will be another generation before the kind of open friendship, trust and mobility will be an accepted part of our lives.

In thinking over the areas of the mass media which are of tremendous importance in shaping the unconscious attitudes of our kids, I felt that something could be done through our comic strips, and even in that violent jungle of horrors known as Children’s Television.

You need no reassurances from me that Peanuts is one of the most adored, well-read and quoted parts of our literate society. In our family, teen-age Kathy has posters and sweat shirts … pencil holders and autograph books. Paul, who’s ten and our Charlie Brown Little Leaguer … has memorized every paper back book … has stationery, calendars, wall hangings and a Snoopy pillow. Three and a half year old Simon has his own Snoopy which lives, loves, eats, paints, digs, bathes and sleeps with him. My husband and I keep pertinent Peanuts cartoons on desks and bulletin boards as guards against pomposity. You see … we are a totally Peanuts-oriented family.

Sitting alone in California suburbia makes it all seem so easy and logical. I’m sure one doesn’t make radical changes in so important an institution without a lot of shock waves from syndicates, clients, etc. You have, however, a stature and reputation which can withstand a great deal.

Lastly; should you consider this suggestion, I hope that the result will be more than one black child… Let them be as adorable as the others … but please … allow them a Lucy!

The full letter exchange between Mrs. Glickman and Schultz is worth checking out. Schultz wanted to include a colored character, but this would be a risky move for his career.

He did it anyway, and on July 31st 1968, Franklin—Charlie Brown’s African American friend—made his debut. 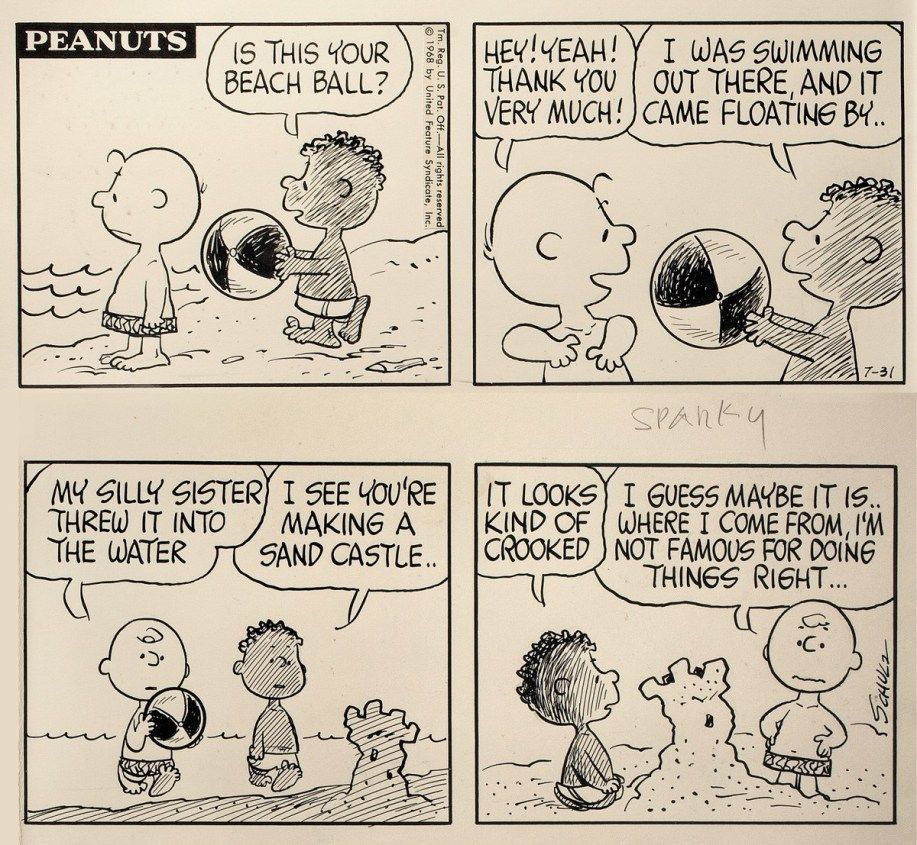