Graduating from the Library 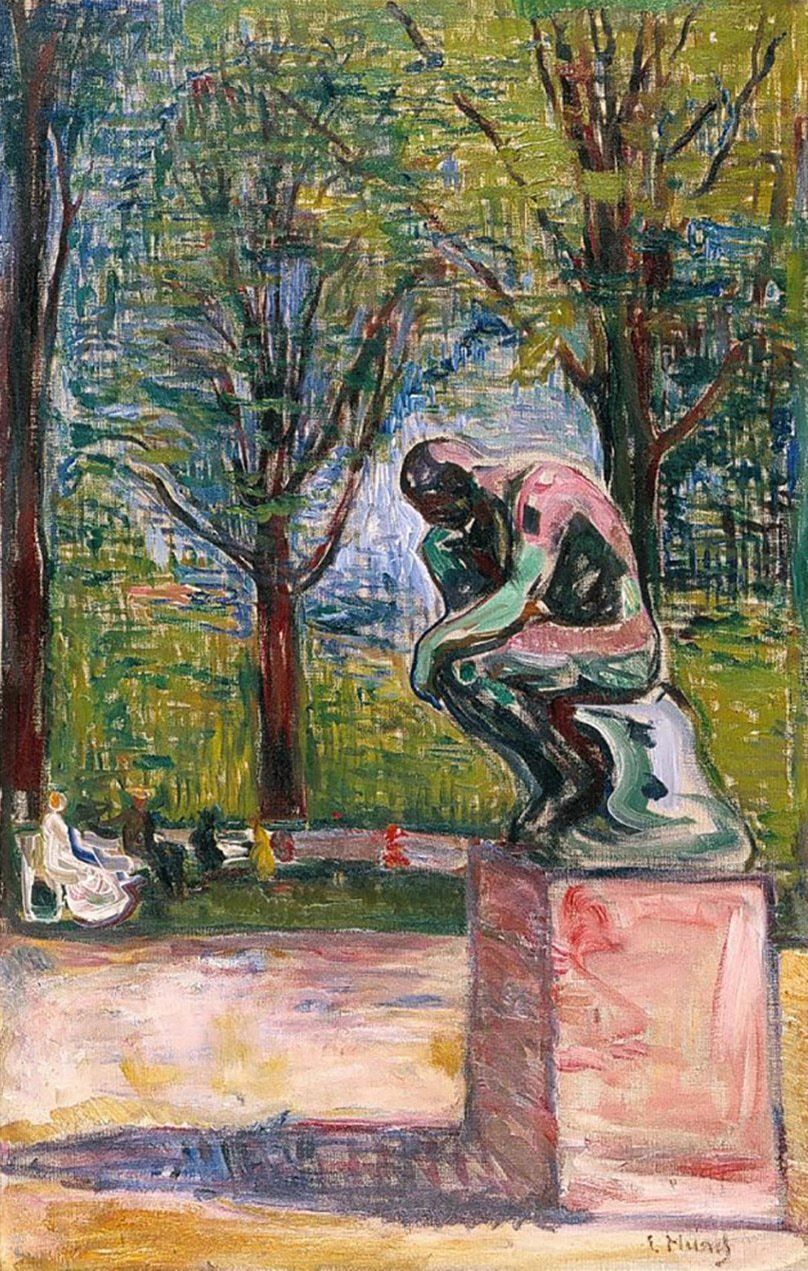 Me reflecting on this semester (The Thinker by Edvard Munch)

In Winter 2020, I took a learning sabbatical to focus on reading and writing. Here’s why I did.

If I could spend 4 months—a semester—doing anything, what would I do?

I asked myself this question last summer. My answer then?

That was a crazy idea at the time, even now it still is. At the time, I’ve never heard of a student doing this before. I didn’t know how things would turn out.

But I decided to do it anyway.

Inspired by Ray Bradbury’s advice to graduate from the library, I named this project, A Semester at the Library.

But now the semester has ended and what a ride it has been.

I’ve learned so much and grown in many surprising ways but it wasn’t without it’s bumps and bruises.

I want to share these learnings and takeaways. This is my reflection on a Semester at the Library.

One question many people asked me was how will this project help out with my career?

I’m convinced that writing is the most underrated professional skill. As I started to improve as a writer, my clarity of thought improved with it. I’m able to clearly express myself through writing and speech. I’m able to think critically during a debate. I’m able to tell stories and persuade others more effectively. I can go on and on. Clear thinking is an extremely transferable skill and I found that writing is the best way to train it.

However, on a longer time horizon, I’m building a personal moat. Like an economic moat, a personal moat protects you from competitors and compounds over time. These moats are built over time and are difficult for a competitor to replicate. With every piece I write, the moat gets wider and wider. And as the moat gets wider, the benefits of the blog will appreciate over time, attracting the right people and opportunities. I’ve already met so many amazing people through my work and I only hit the tip of the iceberg.

Fear is good. Like self-doubt, fear is an indicator. Fear tells us what we have to do. Remember our rule of thumb: The more scared we are of a work or calling, the more sure we can be that we have to do it. - Steven Pressfield, The War of Art

What am I afraid to do?

I would’ve not done this project if I didn’t ask myself this question. Many of my most resonant pieces would not exist either.

This is why I wrote a Letter to My Younger Self. It scared me to write it. I thought it would be too personal. I was practically nauseous the day I shared it publicly. But increasingly I observed that the more something means to me, the more potent the fear. If it didn’t mean anything there would be no fear. So I shared it anyway and I’m glad I did. The reaction to that piece was overwhelmingly positive.

This is my biggest takeaway. I learned that fear is an illusion. It can’t be overcome but rather something you dance with. And oftentimes it’s a compass pointing us in the right direction.

All my past internships have been incredible and it was always the people that defined these experiences. Whether it be the camaraderie built with colleagues or exploring the city with new friends. I thought that these moments were something I’d miss out on working alone in my family home in the suburbs of Toronto.

But this was not the case at all.

Previously, I’ve mentioned that writing attracts the people I want to attract; it’s the most scalable form of networking. My writing was my way of sending out my “bat signal” of my aspirations, ideas, and interests. And as I kept writing eventually some people found my work and reached out. Writing was worth it for this reason alone. A few of them are good friends to this day.

In addition to my writing, a big part of my gap semester was a student run VC fund I’m a part of called Front Row Ventures. Though it’s only an extracurricular activity I spent a lot of time on this. I’d jokingly refer to it as my part time job to friends. Whatever work I put in, was paid back with interest through the relationships and memories I gained. FRV was my primary source for social nourishment and I would’ve felt a lot more lonely if it wasn’t for FRV.

Impact of my Work

I credit much of my knowledge to the generosity of others. Whether it be real life mentors or heroes I’ve admired from afar. My theory was that the impact of writing online is limitless both in scale and longevity. Thus, writing would be the best way of paying it forward. But I didn’t know how much, if any, of an immediate impact my blog would have.

Then as I started to write, others began to reach out to me. Relatives would tell me that they enjoyed reading my writing. Old friends saying they’ve read my blog and it’d spark a conversation we never had before. Eventually, I got my first email from someone I didn’t know, thanking me for my work.

Fast forward to today and in the few months I’ve been writing many people have reached out showing their appreciation. I write for myself first and foremost, I write things I would want to read. But what an incredibly fulfilling feeling when someone else resonates with something I created. This is why I wanted to write in the first place.

If I Were to Do This Again

My Semester at the Library was by no means perfect. Some people asked me how I can be so productive with no structure or external pressure? The reality was quite the contrary.

Part of it is that I’m nearly incapable of working in my house. Pre-quarantine I tried to adapt and work from home to save money. Four months later, post-quarantine, I’m still trying to figure things out. I’ve gotten much better since but physically working from home doesn’t work too well with me.

In an ideal scenario, I would’ve done this on the road. When I was planning my gap, I had romantic visions of reading in a hammock in Thailand, or sipping hot chocolate and writing while traveling across Canada on the Canadian Pacific Railway. Financially, my bank account had other plans, I couldn’t afford it. It didn’t matter anyways as coronavirus shut everything down, but if I could redo this I would plan months in advance and save up some cash in case I wanted to travel.

Graduating From the Library

I was never one to put myself out there. So why did I decide to do this publicly?

At an internship focused school, I wanted to show others that this is an option. An option that can potentially be incredibly fulfilling and impactful. An option that is positive-sum, nearly everyone can participate—no competition required, and doesn’t cost much.

I’ve never heard of a student taking a learning sabbatical to read and write before. For me, this was a story worth sharing. That if I can do it you can do it too.

Now with covid-19, this is as relevant as ever. The economy has taken a hit and there aren’t as many opportunities as before. Perhaps take this as an opportunity.

If you can spend four months doing anything, what would you do?

What skill have you always wanted to learn? What makes your heart beat?

Why not do it?

Why not do it now?

Here are the OKRs that I set for this project and my reflections on each one.

Objective 1: I want to become a better writer.

KR1: Did I publish 1 blog everyday? GRADE: 10/10
I’ve published 130 blog posts at the time I’m writing this piece. My daily blog has been the pillar of my gap semester and I won’t be stopping anytime soon.

KR2: Did I write 8 essays by the end of the term? GRADE: 6/10
I wrote 6 essays including this one. This term I learned the effort and difficulty of writing long form essays. However, with more focus and discipline this key result would’ve been achievable.

Objective 2: I want to focus on learning what matters.

KR1: Did I read 30 books by the end of the term? GRADE: 7/10
In total, I read 21 books. A substantial amount of my reading time was spent on mediums that weren’t books like essays, papers, blogs, short stories, etc. I found that these mediums were just as fruitful as books. But like the previous key result, I think the problem was more so a lack of discipline rather than reading other mediums.

KR3: Complete Learning Project 2: Marketing and Growth GRADE: 2/10
I chose growth and marketing as my second learning project to help out with my newsletter growth. But I eventually dropped it because my time was better spent executing and experimenting.

Objective 3: I want to share my work with others.

KR1: 100,000+ Page views by the end of the term GRADE: 2/10
Final pageview count: 25,300. I abandoned this OKR early on as I realized page views was a vanity metric. I wasn’t optimizing for views or SEO and I wanted to write whatever I felt like.

KR2: 100 Email subscribers by the end of the term GRADE: 7/10
Final subscriber count 71/100. I learned that engaging and taking care of current subscribers is infinitely more valuable and enjoyable than constantly pushing for growth.

*books that I particularly enjoyed

I didn’t have a source of income this term, thus I was relying on my savings from previous internships which wasn’t much to begin with. Thankfully, living at home with my parents covered many of my major expenses including food and rent. Nonetheless, I had to stay frugal and I tracked where every dollar was spent.

I budgeted $250CAD per month. Money was spent on gas, memberships, coffee, and the occasional night out or indulgence. Here’s what my monthly spend looked like:

Largest Expense: 126$ Front Row Ventures Patagonia Vest. Back in November, I voted in a poll deciding what type of gear we should get. It was assumed that I was interested and my name was included in the order. They came in 4 months later in March and I completely forgot about them. Next thing I know I was down 126$. I couldn’t really afford the vest but it does look cool and it’s a nice souvenir.

This project would have not been possible if it wasn’t for the following people:


Previous:If I Were To Do This Again
Next:The Two Torontos